Totò in the Rione Sanità

Although Toto were celebrated even three funerals (the first two in Rome and Naples, the 15 April 1967 and the third in the Rione Sanità, on the occasion of the thirtieth), in fact the Prince of laughter is still alive and well among his people.

We propose then to make your acquaintance, going on the trail of Toto on the streets who have seen baby, teenager and young man.

For reasons of courtesy, try first to find him just below the birthplace, at n. 109 by via S. Maria Antesaecula Street. On the first floor of the building, next to the plaque that recognizes "comedian unparalleled for its mimicry, man of noble sentiments and distinguished poet ", you might see on the balcony on the first floor the Prince making chat with young actor who bought this apartment in a judicial auction and now is trying to put it back.

However, if the master and disciple are not at home, We suggest that you continue on the same road S. Maria Antesaecula Street and, After a few meters, pause in meditation on the secular shrine to our God of comedy (…Ora pro nobis – Sophia Loren, Ora pro nobis – Brigitte Bardot, Ora pro nobis.); still a bit over, and you can also enjoy a coffee in the bar's namesake inspired by the illustrious citizen of health.

At this point, terminated via S. Maria Antesaecula Street News S. Severus, continuing along the ramps of Chinese ascent Toto appears in surreal as "arte povera" sewn for him by Maestro Riccardo Dalisi. The Prince, so dress, was done go up a pillar in the enclosure of "Orange Garden" (behind the Church itself); and as always was to the game, without anything appretendere.

Right in front of the "Orange Garden" toto, in the flesh, you could then riaffacciare from the balcony on the first floor of the building where he played the famous scene of the episode "The Wop" (in the film based on the novel "The gold of Naples" Giuseppe Marotta). Actually this would be Don Saverio Petrillo who – right through the streets of the Rione Sanità – did the ancient profession of "fool" while Don Carmine Lavarone, the Wop in the ward, for years he was based in his house dictating law. But the moment of revenge came when the Wop, After a suspected heart attack, He was advised to refrain from labors and intense emotions. At this point, Totò-Don Saverio took courage for four hands and drove away the Guappo from his house. And it is precisely from the balcony on the first floor of this building that Totò flung into the street, in a blatant, the trunk with white-collar Don Carmine shirts and, to the amazement of the crowd, announced to the entire neighborhood its "liberation".

After this memorable vision, going down the ramps of the Chinese and going towards piazza S. Maria della Sanità, You may enjoy another Cup of coffee, the Prince certainly will offer to "his" bar right opposite the Church of St. Maria.

Otherwise you can go back to the village where Virgin, in Palace of Spanish, Toto would gladly accompanied to the second floor to visit his "Museum". But the Museum must still open, the works have yet to finish ... Toto don't care much, but since time is unable to "find" a new "home" in the Rione Sanità. If you want to know why read the book "Toto memories. Twenty years of waiting " (by Carlo Maria Alfarano, Annalisa in winter and Daniela Giordano).

All in all, though, Totò has great need of a home in the ward. His house, in our humble opinion, is Naples and wherever they practice the pleasure of irreverent mockery, the irony and humor as intelligent but also wherever they live the "men", not the "corporals", part of that suffering humanity, in many dress up, the Prince has interpreted. 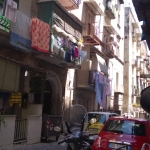 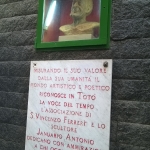 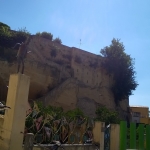 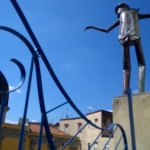