There are places that have a particularly evocative power: one of them is precisely the old Tavern "Cantina del Gallo", at the intersection of via Fontanelle, the descent and the steps of via Telesino. You can reach this crossroads through the Sanità, a few hundred meters beyond the bridge "Maddalena Cerasuolo" or by descending by Materdei, near the Metro (Line 1), down for the descent or the bleachers.

I suppose you're wondering now what is evoking the "Cantina del Gallo", besides the healthy appetite stimulated by odors that originate from the pizzeria oven and kitchen ...

Let's start from the beginning of Osteria, dating back to 1898, year when Domenico Silvestri (said Minigone, for his size) – great-grandfather of Rosario, the current owner of the restaurant-pizzeria – decided to open an exercise in "wines and oils", in front of the farm which he himself cultivated the soil.

Imagine that the place that we invite you to know was, at the end of the 19th century, a predominantly rural area located in what today is a deep valley between the hills of Materdei and Capodimonte and Colli Aminei (the "Ameni" hills, already frequented by the inhabitants of the ancient Neapolis Greek Roman). This Valley was carved by the waters that flowed over the centuries, often powerful as cold lava – from the hills down to the Rione Sanità to the village Virgins (locals called it "lava of virgins" the river of mud and debris). Over time, in the hills eroded by water, opened several quarries from which was extracted the Tuff, that was for centuries the main construction material used in Naples. To avoid the damage that water and debris could cause to people and things, in 1868 he prepared a draft inalveamento to those waters of which there is a sign in access of inspection (built in neo Gothic style), you will see continuing along via Fontanelle just beyond the "Cantina".

At the time of the Minicone Tavern was therefore probably also frequented by workers who worked in the surrounding quarries. Indeed, a quarry of origin Bourbon – the beautiful trapezoidal section – It is right behind the current Pizzeria and is used as a garage, where can you park if I wanted to stop eating there and listening to the stories that Rosario, with affection and warmth circuit, loves to narrate.

Here's, then, that would tell you how his aunt Concetta Rosary, daughter of Minicone, has been instrumental in giving to the tavern its present name, because one of her specialties were-in fact – the roosters that raised, "executions" and cooked for his loyal customers. But also because in the ward was forced to note Concetta guappi, he assiduously frequented the local, a real "code of good manners" and convinced them to leave any weapons outside the Tavern. In short, the "Cantina del Gallo", in those years between the two world wars, It was a sort of "free zone", a kind of small Switzerland.

Yet, Rosario you could say how the transformation of the tavern in the pizzeria was determined by the crisis, in the second after war, of the formula "cellar". Then Mariano, father of Rosario (married in 1945 with Mrs. Rita N, that is part of a family of restaurateurs in the area Arenella at Vomero), He decided to learn the art of pizza with the help of Giovanni Lettieri (descendant of a family of master pizza makers).

Then, by switching to more recent times, among the many patrons at the "Cantina" – of all walks of life – Certainly he would narrate you Rosario, with emotion, the young man had direct knowledge Pino Daniele. At the beginning of his career the "half Black" attending, In fact, This pizzeria because with his first band, the "Batrachomyomachia", did the tests at a local site in vico Fontanelle (that belonged to Chakwizira, one of the band members along with Raffone, Jermano, Rino Zurzolo and Avitabile).

Hearing these stories you can, then, better understand what we wanted to say talking about the power Vocative of this place.

But the suggestions of drinking fountains do not end here. Rosario you might talk about the spirit of solidarity that animates the area and how just a few metres from the "cellar" for more than thirty years, the volunteers of the Center "La Tenda" founded by Don Van Rooyen, militant priest in combating drug addiction and the hospitality of the homeless. The Center is housed in the former convent of S. Maria della Vita, built in the second half of the 16th century and, then, in the nineteenth century used as a Hospital (dedicated to St. Camillo).

Finally You could say to be careful the Rosary signs of religiosity in the area starting at the newsstand with Crucifix, right there on the pizzeria. And then – Would tell you still – continuing along via Fontanelle includes the simple Church of Immacolata and another newsstand with Crucifix, until you get to the Church of our Lady of Mount Carmel sort next to Fontanelle cemetery, one of the most surprising and fascinating of all Naples.

Then, tonight we're going to make a pizza from Rosario? 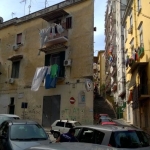 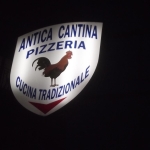 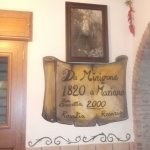 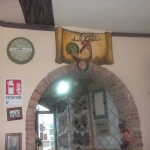 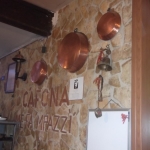 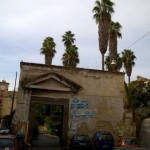 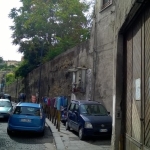 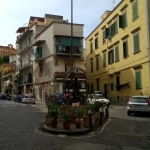 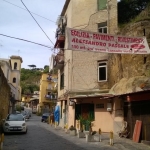 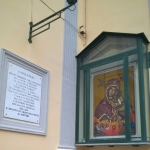