The many faces and the laboratories of the “"Spagnuolo"”

The Palazzo Moscati – said of "the Spagnuolo " – is the kaleidoscope of the Sanità district that, somehow, returns children everyone who comes and tries to "handle it".

If, entered the "Borgo Vergini", further a bit between the colourful stalls of fruit, vegetables and various kinds, we strongly recommend that you try playing with this “place of wonders” to discover the many faces that have driven over the past 300 years. And please do so, First of all, accompanied by Massimo Rippa, architect and editor of "The Sun through the alleys. The beginning of a path in the Rione Sanità” (publication made by the municipality Star-S. Carlo all'arena di Napoli, from which comes the news shown here in italics).

The first Kaleidoscope colours and shapes represent the origins of the Palace and the face of the Marquis Moscati, that "becometalking rightful owner in 1738, He decided to entrust the work of transformation to the engineer Francis Attanasio, unique strong name to which all historians attribute the authorship ". Immediately, however, face, colors and forms have changed to make "highly likely the paternity of the most talented Sanfelice. A reason for this, they take as a reference the daring structural cage openings, competing with the nearby Palazzo Sanfelice, designed byThe same Marquis-architect, Ferdinando Sanfelice, nearly a decade before. In addition, Apart from the wonderful technology for empty and full, still, a glance that you receive – Thanks to recent renovations that have put back the original colors – in the courtyard: at staff by Ferdinando Sanfelice, in via Sanità, There is a composition of neutral colors; settlements of Virgins instead, the unusual Green and pink, they fit, probably within a central European fashion that, at the beginning of the 18th century, It was imported by architects, the result of the Viceregal Court in Austria. The ladder, between the two wings of the Palace, It is not suffocated, but free, Thanks to the numerous overtures that guarantee a calm introspective game for anyone who crosses it. The course is facilitated by the presence of steps composed a wide tread and a brief rise: solution that made it possible to observe both the rear garden – Unfortunately no longer exists after completion, in 1870, the current via Mario Pagano – both the yard. The ladder, independent element and mediation, between vertical and horizontal space, offers special effects. Moreover, we note again the decorations; in particular the choice of alternating pediments, both in the backyard in façade, informing of an understanding with the Roman environment of Francesco Borromini”.

Shake still our "object of wonders" is manifested, even, the face of Charles III of Bourbon, “He loved to change horses of its carriages, with oxen, animals slower but stronger to withstand the ascent to Capodimonte”.

Another shot at the Kaleidoscope, and appear the appearance which is reportedly the name which made the building universally known. In fact, “among the 1811 and the 1813, the sector with the internal Chapel, It was bought by Don Thomas Atienza, Attorney General don Vincenzo Ossorio, belonging to a respectable Spanish family. The Atienza, for his vanity and for use to surround themselves with artistic works, obtained with money derived mainly from gambling, Ironically, at one point he lost everything and even real estate. From this particular character gave rise to the nickname of the building: "Spagnuolo"”.

In the twentieth century faces and colours of "Salem" become darker. In 1925 Prince Umberto of Savoy vi inaugurated the "Home of the Knave” (in the same year that the Palace was declared a national monument) and a few years later, in 1936, There was established the fascist party so much that by the people was also known as "Palace do ' Bundle” (the memory of this period is fixed on the plate of the right wall in the entrance hall of the Palace). Finally, as a result of the terrible bombing of August 1943, a part of the Kaleidoscope went into fragments and, After the tragic earthquake of November 1980, the faces appeared desperate earthquake victims who occupied looking for a place to live.

In the second half of the 20th century, the faces of the building are returning decidedly comforting. In the early 1990s, made its appearance art gallery owner Chelsea Malpass that, on the second floor of the building, he installed the "Fondazione Morra – Visual Communications Sciences Institute".

During the same period, the face of a great artist of the past century, the sculptor Augusto Perez, appeared in the apartment that he purchased in different lands and his works; There he made a series of works which allowed retrieval of eighteenth-century mouldings and decorations. The son Massimo Perez, artist and Professor at the Academy of fine arts in Naples, He continued the paternal tradition by allowing you to open in their halls of “Institute of Guarattelle” by Bruno Leo (today, though, the Institute no longer resides here).

We invite you, then, now change playmates, to discover the latest wonders that you can admire in the Palace, two big Labs artistry and profound beauty: ”The Gallery of the clothes of "Spagnuolo"” And the “Workshop” local crib artists have master's and restorer Biagio Roscigno, If you want the prof. Massimo Perez, creator of Gallery, will be happy to accompany you on a unique journey into the Neapolitan fashion, from the 15th to the 20th century while master Roscigno will show you the artistic scenes crib or objects being restored on what is working and reveals some great little secret of the world of the Neapolitan crib.

But that's not all ... many more surprises will reserve the "Spagnuolo", especially if he can take on the role of Totò, for years find housing on the second floor of the building! 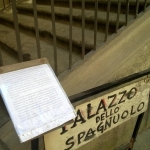 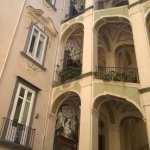 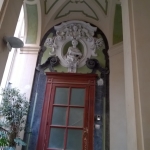 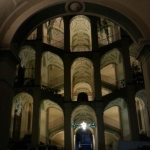 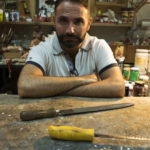 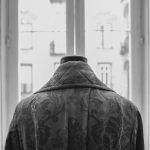 The Palazzo dello Spagnuolo is a building of private citizens, some of them have retained and enhanced the historical apartments of which they own.