In the heart of Rione Sanità, a few steps from the Church's accounts. Vincenzo and deck overlooking the same via Sanità, You can find a square dedicated to the same Saint Vincent Ferrer, always dear to the locals.

On this little square overlooking an original architectural complex, built in the mid- 1700 (designed by Bartolomeo Vecchione) and composed of the Church dedicated to "Immacolata e S. Vincenzo "and Palace-villa (with courtyards and indoor garden), born as Convent able to accommodate up to 250 orphans.

Today the Church hosts the "new theatre" and the former convent is the home of the Association ONLUS "growing together" that, with emblematic historical continuity, offers welcome and support to anyone with difficulties related to addictions or, in General, to social unrest.

The Church and former convent, together with the adjoining houses of the 19th century, they create a place, in many ways, surprising. The Church is a little set back, almost wanted to leave the scene to the façade and the original staircase shrouded "double ramp" of the former convent. But, If you get close to the building's attention is captured by the metal sculpture of "arte povera" (the master's school Dalisi) that – suspended in mid-air – represents in modern forms the Annunciation of the Angel to Mary Immaculate.

If you then enter the former convent, Do you expect to find a classical structure of hospitalization. Instead – at this point of the path – start making the experience of microcosm of suffering and hope that, from about 10 years, is housed in the building.

Greeted by Rosario Fiorenza (founder "growing together") – or one of his boys – You can visit the indoor garden, where the community activities and entertainment (There is also a platform for performances); from this garden can also be accessed at the crib art and ceramics, in which they work some of the boys hosted. It's a human charm and popular place particular, because on it face private apartments whose residents often attend, directly from their homes, at events organized by the Association.

In addition, You can ask to go to clubs under the same Association, on the first floor of the building, where people live and where there is a large living room, features a small theater, and a typical kitchen in which "operate" Sisters of Rosario.

This time we talked less for history and art, Why was worth devoting more space to the atmosphere of this unique place. But to discover the emotions, the pains, the joys, the sounds, the noises and much more, You should come and spend at least one day together in Rosario and his boys. 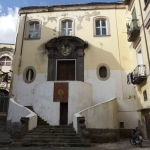 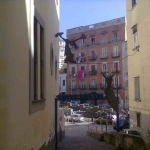 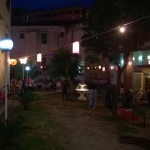