If, from the heart of the Borgo virgins ", cross the populous Supportico Lopez, then, on the left carried out via Miracles, After about a hundred meters You unfolds before a unexpected view. As Pisa has its famous Piazza dei Miracoli (the one with the leaning tower), Naples also has its "Miracles".

The "Miracles" Neapolitans have a neighborhood that has always lived a life of its own (almost in itself compared to surrounding areas), perhaps also because of its special location planning. In fact, This neighborhood extends from which we are going to talk to you, down the Hill of Capodimonte, through amazing "vie-guiding light (possible destinations of what today is called trekking urban, Although some of these pathways are not viable or have "explored" with difficulty).

But back to the unexpected view of Miracles square NAPOLETANA. What you may wonder – coming from the street of the same name – is the strange atmosphere of a widening unexpectedly occupied by a garden with trees, a small hill that climbs towards the Church (at the bottom of the square). On one side of the same square there is also a fully equipped play area for kids. The ancient trees (including even some fir trees) give shade in the summer heat who, landing on this "island", You can quench the fontanina on the Church itself and some rest on nearby benches.

The square in which we find ourselves was, by the end of the 1700, a vegetable garden in front of the Church of St. Maria de ' Miracoli, at the disposal of the nuns of the adjacent convent of St. Mary of Providence (now occupied by the building of the former boarding house for women and from State school "Vincenzo Cuoco"). In fact, This area of the Sanità district – like many others – monastic origins. The Convent It was enlarged and renovated in the mid- 1600 and intended to house girls from good families in financial difficulties (they would there observed the rule of the third order Franciscan). Throughout history, remained virtually unchanged the target as Female boarding house, so during the Napoleonic period (under the personal care of Caroline Bonaparte) as the last Bourbon period; with the unification of Italy the same boarding house was named after Maria Clotilde of Savoy; During World War II it was used as a hospital, then became home to an educational institution recognized as. The Church, built in the XVII century, He had a prospectus in 1790, the Vanvitelli's pupil Camillo Lambert. Inside the Church, are valuable and artistically interesting original flooring, paintings by Andrea Malinconico and Luca Giordano and organs (fake) designed with inspiration from the Vinasse.

Little by little you're convinced that "miracles"? If you are logging in the former girls ' school and – crossing the first courtyard – follow the courtyard larger than the old Convent, you will also find the "Garden of miracles". It is a part of the yard that was recently appointed to the children's play area "Playroom", housed in the wing of the building facing this same yard. Everything is colorful and brings joy. But one of the long sides of the garden is enclosed by a black wall that hides the otherwise fantastic panorama and, If you turn towards the entrance and returns in the first courtyard that you went through, the time seems stopped in early 1900 (everything is abandoned and uncultivated garden of this courtyard is sadly, in the middle of which is also concealed an old well). The miracle happened only half, but for the time being can fit even so. As says the phrase of Paul Claudel set out in a corner of the garden: “There are flowers that wants to get out among the rocks. Would maybe a little shock to make them tick” 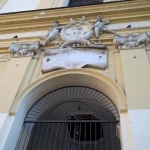 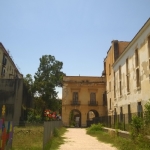 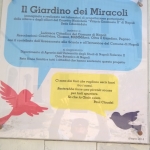